OK, so they’re not all really that ugly; some of them are actually pretty graphically cool. But holiday garments paying homage to everything from a love of Stranger Things and Mean Girls to Drake and the Beatles — and a Wonder Woman sweater so gorgeous we’d wear it any day of the week — are all included in our roundup of pop culture-themed ugly Christmas sweaters. So get to shoppin’ for yourself or for the more fashion adventurous on your gift-giving list. P.S. What would make any of the sweaters even better? Lights!

Former Secretary of State Hillary Clinton told radio host Hugh Hewitt that humanity is “racing headfirst into a new era of artificial intelligence” without sufficient preparations of how that will impact the world.

“Bill Gates, Elon Musk, Stephen Hawking, a lot of really smart people are sounding an alarm that we’re not hearing,” Clinton said in an interview promoting her new book. “And their alarm is artificial intelligence is not our friend. It can assist us in many ways if it is properly understood and contained. But we are racing headfirst into a new era of artificial intelligence that is going to have dramatic effects on how we live, how we think, how we relate to each other.”

Artifical intelligence (AI) is the simulation of human intelligence processes — such as learning, reasoning, and self-correction — by machines. The technology has advanced rapidly in recent years, leading to innovations including smart home assistants and automated stock trading. At the same time, the evolution of AI has led to fears that AI could eventually surpass human understanding and upend societies.

Contrary to Clinton’s claim, Microsoft co-founder Bill Gates hasn’t actually said that “artificial intelligence is not our friend.” In the foreword of Microsoft CEO Satya Nadella’s book, Gates wrote that “AI is on the verge of making our lives more productive and creative” while also highlighting inherent challenges: “How do we help people whose jobs are replaced by AI agents and robots? Will users trust their AI agent with all their information?”

Tesla and SpaceX CEO Elon Musk is perhaps the most apocalyptic voice when it comes to AI, asserting that the technology poses a “fundamental risk to the existence of civilization” and is the most likely cause for World War III.

Theoretical physicist Stephen Hawking is ambiguous on AI, recently stating that creating effective AI “could be the biggest event in the history of our civilization. Or the worst. We just don’t know. So we cannot know if we will be infinitely helped by AI, or ignored by it and side-lined, or conceivably destroyed by it.”

‘We are totally unprepared’

Whatever happens, Hawking stressed, humans should be ready.

“Unless we learn how to prepare for, and avoid, the potential risks, AI could be the worst event in the history of our civilization,” he told the Web Summit technology conference in Lisbon, Portugal earlier this month. “It brings dangers, like powerful autonomous weapons, or new ways for the few to oppress the many. It could bring great disruption to our economy.”

In 2015 Musk and Hawking joined other tech pioneers and academics in signing an open letter urging significant research on the societal impacts of AI.

Clinton, who lost to Donald Trump in last year’s presidential election, noted that “one thing I wanted to do if I had been president was to have a kind of blue-ribbon commission with people from all kinds of expertise coming together to say what should America’s policy on artificial intelligence be?”

Scientists have discovered that a subsurface ocean on Enceladus could have existed for billions of years, providing plenty of time for microbial alien life to emerge and evolve.

One of Saturn’s icy moons, Enceladus is considered one of the best bets for finding extraterrestrial life within our solar system. Geophysical evidence has long suggested it boasts a salty, liquid ocean between its frozen shell and rocky core. Scientists believe the ocean exists as the result of heat generated by hydrothermal activity the moon’s interior.

NASA has been considering a mission to Enceladus to search for evidence of alien life for several years, although no confirmed plans are in place. 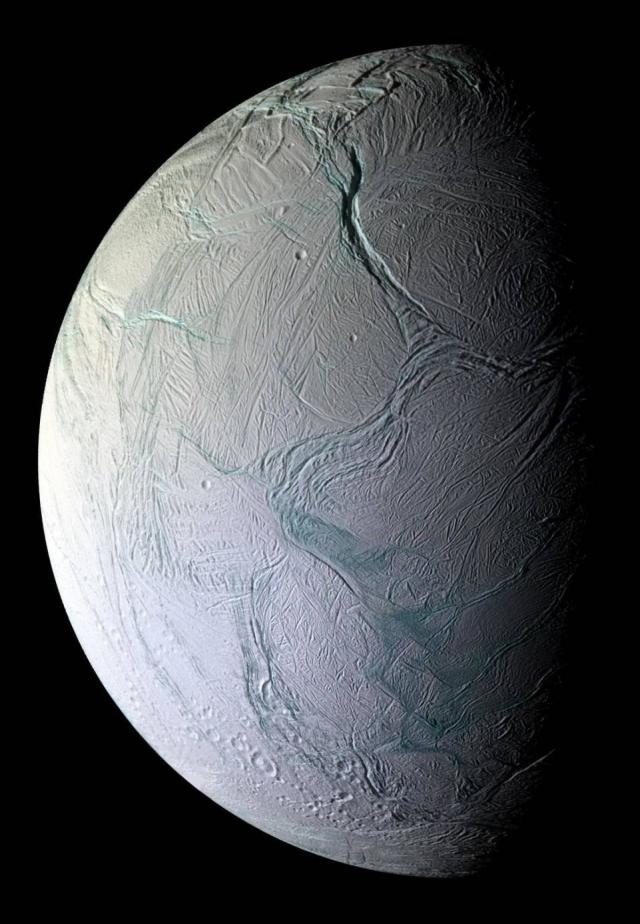 In a study published in Nature Astronomy, an international team of scientists looked data from NASA’s recently completed Cassini mission to better understand what is going on within Enceladus’ that allows it to have a sustained, global ocean. If it was just being heated by tidal forces within the ice, the ocean would freeze over in less than 30 million years. But they now know this is not the case—so something else must be heating the ocean.

Researchers looked at different ways Enceladus could be generating the heat to maintain the liquid ocean, producing models to find one that fits with Cassini observations. Their findings indicate that the additional heat is the result of Enceladus’ core being highly porous.

Water moving through the porous rock is heated then transported up through narrow upwellings, with temperatures exceeding 90 degrees Celsius. The team also found these hotspots are particularly prevalent at the moon’s south pole, which explains why the ice seems thinner at this point. Further analysis showed that this heating mechanism could be sustained for tens of millions, if not billions of years. 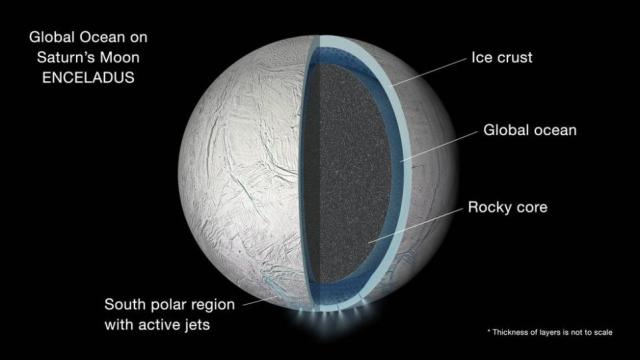 Encelauds has a global ocean sitting between its icy shell and rocky core. NASA

One of the most prevalent theories as to how life evolved on Earth is through chemical reactions at deep sea hydrothermal vents. The presence of hydrothermal activity in Enceladus that could last for such a long time has major implications for the potential for life to evolve. If Enceladus has had a liquid ocean for billions of years, life would have had the chance to emerge and evolve into a more complex form.

In an email interview with Newsweek, lead author Gaël Choblet, from the French National Center for Scientific Research, said that while he cannot speculate on the presence of alien life on Enceladus, their timescale for hydrothermal activity does bolster the case that microbial life could emerge.

“If a new theory published last year is correct, then powerful hydrothermal activity could have been occurring since the formation of the moon, possibly as much as the age of the solar system,” he says, adding that which timescale they are working on—tens of millions or billions—could be determined with future research

He said the team now plans to simulate the chemical interactions within Enceladus and to work out how heat and chemicals are transported around the ocean.

Ravi Desai, from Imperial College London, U.K.,has previously looked at the chemistry of Enceladus’s ocean. Commenting on the latest study, which he was not involved in, he says the findings represent “excellent news” for the possibility of detecting microbial life deep in the ocean.

“These findings from Enceladus are highly relevant to exploring the icy moons of Jupiter … [The] results are particularly exciting when considering what could be discovered at Europa and Ganymede.”

David A Rothery, professor of Planetary Geosciences at the Open University, U.K., also says the findings are exciting as “it all fits together”—Cassini observations have now been reconciled with a suitable model of heat transfer within Enceladus. In terms of the potential for life, he said the only possible drawback is that due to its size, it only take about 250 million years for the entire ocean to be recycled through the rock—and once this is done, the number of chemical reactions that take place becomes very limited.

“But this is still happening at the moment because we’re seeing the products,” he says. “Chemical reactions are going on even today. If it’s going on today it could have been going on a billion years into the past, and that’s long enough for life to get started—and to have evolved beyond the very most basic stages. It could be quite a complex microbial community down there and we’d love to study it.”